Heading on up to Old Trafford, and here we go again.

Here we go again. You might have thought we’d got it out of the way for the season, and memorable it was too, then the ghost of Bert Millichip rattles his balls once more time and we have to travel up there again.

The FA Cup third round used to be the best day of the season. Now, like Halloween and Valentine’s, it’s been stretched over a weekend and almost every team uses it as an excuse to rest a few players. But there are still a couple of traditions that are being kept alive; a couple of days before the match whoever the Villa manager might be invokes the spirit of 1957 and says it’s about time we did it again, then he drops most of the team and we lose. 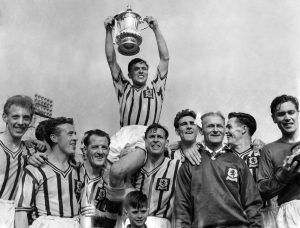 We’ve already beaten Manchester United at Old Trafford once this season and they’re having one of their regular crises because they’ve lost another match. There’s panic on the streets of Dublin, Oslo, Plymouth and Bangkok, and they’re wondering to themselves; who should they support next season. Of course, all this means that they’ll put in their best performance for years on that traditional FA Cup time of five to eight on Monday night. With no replays.

There’s not much point saying anything else about this match, or about them. Everybody knows who they are, who they’ve got and what the ground will be full of. We’ll know just how seriously Steve Gerrard will be taking the competition when the team is announced, but there’s a good chance it’ll be a bit different to the one next Saturday, when we play Manchester United. The fun never stops.

As for the result, it doesn’t matter what kind of team either manager puts out, or how well they play. It’s our year, etc.