A completely impartial look at the task awaiting Villa at Old Trafford.

Lovers of seventies comedy-drama will recognise the title from a play set in Manchester about a Sunday league match, where the referee got fed up with the constant bickering of the two teams and officials and decided to score the winning goal himself. I’m sure nothing like this could possibly happen now.

Dear Lord God do we have to? Like tax returns, car insurance and clearing up after Christmas, the annual trip to Old Trafford comes round once a year and the best thing is that you don’t have to do it again this season.

They’ve started off well enough but they aren’t six points clear at the top of the table so their supporters want a new manager and more money being spent on more players, the ones they’ve got clearly not being good enough. The attention of the world will be focused on Cristiano Bloody Ronaldo, and if it isn’t we’ll be told that it is so makes no odds what you’re doing, you’re fawning over him in any case. Talking of which, kick-off has been shifted forward because of a gig at the cricket ground that’s only been known about for four months and not because of the greatest Portugese traveller since Vasco da Gama, oh no, perish the thought. 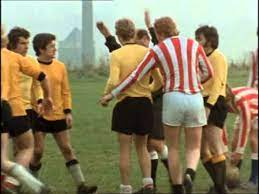 And playing the part of the Washington Diplomats this aftenoon (ask your dad) will be plucky little Aston Villa, a club so totally insignificant that they’d won the league five times before Manchester United existed, not that it makes much difference. What our team will look like, nobody can tell. After all, there are steps to fall down, laces to trip over and a host of other potentially serious injury-inducing hazards to overcome before kick-off. I know that every time another calamity rears its head we say that it can only happen to us, but surely no other team can have a player come on, get injured whle scoring and booked for celebrating the goal. That, ladies and gentleman, is Aston Villa. Don’t think too much about it or you’ll ruin your mind.

You know what’s going to happen before the match – the story will be about Ronaldo and his supporting cast, with the Villa as the footballing equivalent of the extras who drink in the Rovers and haven’t said a word in ten years. No matter what the score is, the reports afterwards will be much the same. And during, the only doubt will be whether the turning point will be a perfectly good goal we have disallowed or the penalty they get when one of their players slips on a piece of damp grass anywhere outside the centre circle. Unless, of course, the referee is one of that rare band who apply the rules fearlessly and without favour, thereby ensuring that the team who aren’t Manchester United have the glimmer of a chance. Anyone got any idea who the ref is?