Three points at Old Trafford is just one more step on the way.

Beating Manchester United away doesn’t happen very often. 2009 was the last time, and before that November 1983, when we won 2-1 with two goals from Peter Withe (As an aside, I still say that Villa team was one of the great what-ifs of our modern history. We had youth, experience and were targeting replacements before they were needed. A couple more signings and we’d have been set for another crack at the title. Instead, we got rid of the manager). 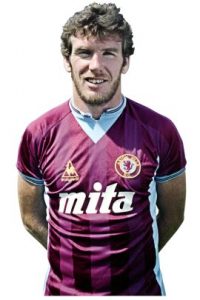 Naturally enough the celebrations were long and loud, and while they were well-deserved it’s time to move forward and concentrate on the next game. Looking at the team on Saturday it appeared that they had no fear, they knew they were capable of getting a result, and if you can do that at Old Trafford you can do it anywhere. This Manchester United side isn’t a bad one and if they’d won they would now be two points clear at the top of the table.

Throw in Cristiano Ronaldo’s return, Leon Bailey out injured and the scene was set for the headlines that had been written in advance, while Villa’s whole attitude would have been to hope for a miracle while settling for damage limitation. It didn’t happen that way, though. They might have had most of the possession, and 28 shots might seem a lot, but hardly any were on target (one being particularly hilariously off target) and that indicated Villa’s defence did such a good job that the home side were for the main restricted to hitting and hoping. In contrast, Matt Targett and Ollie Watkins should have put the game out of reach in the first half.

That’s Manchester United, Arsenal, Chelsea, Liverpool and Spurs we’ve beaten in the past twelve months, and by my reckoning the last time we did that was in the Ron Atkinson era, when we played with the flair and swagger that showed we weren’t afraid of anyone. Since then there’s always been a team who had us beaten before kick-off, and of course that traditional Villa belief that wherever the big stage might be, we didn’t really belong there.

Now, the situation is different. The team has stepped out of the shadow of you-know-who and have realised that we actually can do something without him. Beating Everton was the start of it, winning at Old Trafford was further proof. Yes, he was a big loss and the timing of his departure left a lot to be desired, but it wasn’t the insurmountable problem it was held up to be. We know we can win without him and we know we can win anywhere.

Football isn’t a computer game, it isn’t just a case of spending money and getting instart success and Villa’s philosophy now seems to be something unique in the Premier League. Get the right man in charge, give him the players he thinks will take the team forward but also allow him the time to build for success. It’s gone virtually un-noticed elsewhere but we’ve been quietly signing up the best young talent from all over Europe. At every age from sixteen to twenty we’ve got some of the best players anywhere. Jacob Ramsey has moved from the Academy side to becoming a first-team regular and there are half a dozen more who could make the step up without looking out of place. It’s not going to happen overnight and there will be slip-ups along the way but when we finally get there we’ll have every other club in the world trying to imitate us. Just like we used to.

We’ve won at Old Trafford and quite rightly made much of the occasion. The next step is to emulate the words of Sir Graham when we beat Charlton away in 1990; “We came here, we got the three points and now we’re going home.” No fuss, because it was no big deal. That’s what we do.