Dave Collett writes about a talented midfielder and a failed promotion attempt.

Fast-forward eight years to 1974 and Villa were on the rise. Having taken the punishment for the ineptitude of its leadership for decades, a new board with ideas of how to run a football club were now in charge. A vibrant, productive youth system had already generated two national trophy-winning sides and the management team had a good record of getting value in the transfer market. Not that there was any actual money to spend when Vic Crowe first took over as boss, as all the cash had been spent by the previous incumbent, Tommy Docherty on a Brave New Future that didn’t work out.

By spending every penny wisely, and getting the right people in to ensure the development of the young players and showing that there was a clear path through to first-team football, the future seemed bright under Vic Crowe. The trouble is that many football fans don’t care that much about this ephemeral future business, being more focussed on success right now. Such is the burden that all managers work under and which determines whether they will get the chance to benefit from any group of new lads coming through.

Crowe’s promotion team of 1972 was captained by Bruce Rioch. You could describe Rioch’s career as conforming to the Chinese saying about living in interesting times. Having paid a club record £100,000 Docherty didn’t seem to know where to play him -up front or in midfield. The story goes that Rioch was called into a meeting with Docherty, Cox and chief scout Peter Doherty. Doherty asked Bruce what was his favourite position; the reply was, “In midfield.” Doherty looked at the manager and the coach and said simply, “I told you so!”

Crowe resolved that issue, but after the player had returned following a disrupted pre-season in the summer of 1971, he was often played in a defensive midfield role. This seemed odd but often worked very well. Rioch had real pace once he got going. A superb body-swerve, quite the equal of Bobby Charlton’s, would allow him to run free into midfield and once within thirty yards of the opposition goal you wouldn’t bank on him missing the target. The thunderous power of his shot was a matter of record. In a home game against York City, one of his free-kicks was blocked by a brave defender. The game had to be held up while the trainer helped bring him back to full consciousness. 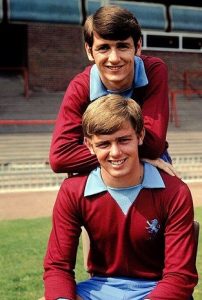 The move up to the second level would be a test for all the players but for Rioch it was like watching a fish take to the water. The goals continued to flow from that left foot as Villa swept to the top of the division, allowing some fans the luxury of contemplating the joys of back-to-back promotions, taking the club back to where it belonged. Alas, injuries, some losses of form and the prevalence of visiting teams being happy to settle for draws at Villa Park, acted as a brake to our ambitions, as did a spending embargo which brought into doubt how far-sighted the new board were as the entry gates to the first division appeared in the near-distance.

Rioch’s own season ended early after a knee injury. By then Villa’s challenge was more or less over, so the priority was to get him ready for the start of the new season. During the previous autumn, Bruce had had some problems resolving the issue of which international team to make himself available for. Such had been Rioch’s early season form, his and Villa’s second division status was not seen as a barrier to international selection. Tommy Docherty, now in charge of the Scotland side, was the first to pounce and named him in a squad for a friendly fixture. The trouble was that Blackpool had got themselves involved in a League Cup second replay, which funnily enough was played at Villa Park. In order to play this game, Blackpool had to re-arrange their league game with… Aston Villa. The new date arrived atclashed with the international fixture. Both Rioch and Villa took the view that an important league fixture carried more weight than a friendly, so Bruce chose to play for his club. Cue an intemperate eruption from Docherty, who accused the player of lacking commitment, etc. Eventually, the Doc backed off and admitted that communication between the two bodies could have been better.

Bruce was fit and ready for August. The Villa board had decided to more or less stop supporting Vic Crowe and Ron Wylie in the transfer market so the only players to come in were the midfield scrapper Trevor Hockey and the raw-boned striker Sammy Morgan. It’s hard to believe that this would have been the extent of the strengthening had decent funds been available. Nevertheless, that was the situation, though the picture took on a more pleasant look as Villa got off to a strong start, climbing up to second place by the start of November. Rioch’s goals from outside the box were a regular feature.

In the previous campaign, both Burnley and QPR were outstanding sides who had pushed Villa down into third place. This time around only a Jack Charlton-inspired Middlesbrough seemed a cut above the rest and things looked good for us. And then the injuries came… First, Rioch was put out for two months followed by the dynamic Ray Graydon for over a month. With our two most creative players missing, scoring goals became a struggle, though a young Brian Little contributed a handful. By the time Bruce returned Villa had sunk to mid-table. Recalled in an unfamiliar number seven shirt, he duly scored from the edge of the box to put us ahead against Notts County but it was only worth a point as the winless run dragged on into the new year.

And so it went on. Football’s a strange game, though, so anomalous as it may seem, Villa then went on a mini cup run. Lower division Chester City were beaten unconvincingly in the third round and everyone enjoyed the taste of victory after two long months. The draw at Arsenal next up looked distinctly unpromising for those who realised that Villa couldn’t buy a win against second-rated teams, let alone first division artists. Yet, there was a sense that Arsenal were in something of a decline and, after all, it was the cup. 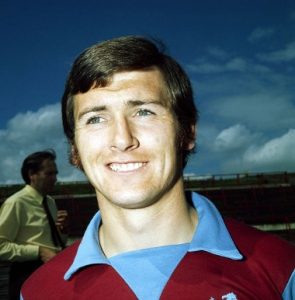 The way the game turned out, it was impossible to believe Villa’s run of results was so poor. They went at their superior opponents from the start and it was hardly a surprise when Sammy Morgan put us in front with a memorable diving header from Chico Hamilton’s swinging cross. With Villa’s backline looking solid, it seemed that one goal might be enough but Morgan was unjustly sent off near the hour mark and the home side equalised shortly after. Those expecting the floodgates to open were proven wholly mistaken. In fact, a powerful free-kick from Rioch was saved by Wilson, despite his being apparently concussed in the incident that saw Morgan dismissed by referee Clive ‘the book’ Thomas.

Villa’s bad run had seen attendances dip to the mid-twenties but a cup match was something else. 47,000 crammed in for the replay and were duly delighted when Morgan scored an early goal after an error from the Holte End’s panto villain, Wilson. Such was the quality of Villa’s performance that Arsenal showed few signs of getting back into the match. When Rioch’s burst down the right-hand side gave him space for a cross, Wilson couldn’t gather the ball at a stretch and Alun Evans knocked in the decisive second. What a night! It summed up Villa’s season that on the following weekend, they lost their unbeaten home record to promotion-chasing Luton whose winning goal came from a penalty so dubious even Jonathan Moss and Kevin Friend might not have awarded it.

So with Villa now in with a chance of the ‘double’ – relegation and the cup – the team bus made its way to Burnley who had beaten Villa to promotion the previous season and had settled nicely into the first division. The home side were big favourites and took a half-time lead with a powerful header from their fine number nine, Paul Fletcher. Villa battled every inch of the way on a seriously heavy pitch but couldn’t find a leveller. Manager Vic Crowe noted how long it took his players to get off the pitch at the end, as they were near exhaustion. Any Villa fans waving farewell to their heroes after a stirring cup match would have been dismayed to be told they would never see Bruce Rioch in a Villa shirt again.

Rioch had expressed a desire to play in the top flight, hardly an unreasonable demand for such a talented player. Crowe and Wylie asked Bruce to concentrate on the football and they would deal with the transfer business. It looks that the cup run was the crucial factor. With promotion disappearing over the horizon, and the chances of Wembley glory settled for another year, the way for Rioch to depart was clear. In the same week, Derby County got in touch, waved a cheque with ‘£200,000’ written on it, Bruce’s understandable desire to play at the top level was fulfilled, Vic Crowe at last had some decent money to spend on players and a small army of Villa fans, including this writer, were well and truly pissed off at losing such an illustrious footballer.

In the short term, not a lot. Vic Crowe was unable to spend the funds he had generated before the season closed. In the week Rioch left, Villa won at Cardiff to end over three-and-a-half months without a league win. A run of five wins out of seven suddenly brought Villa to the edge of the promotion places but one win in the last eight meant that we finished below halfway and Crowe was duly sacked. Rioch, meanwhile used the run-in to get acquainted with his new team mates up the A38.

In the medium term, plenty was going on. Ellis’s board had wanted a ‘glamour’ name to replace the quiet-mannered Crowe. It must have raised many a laugh when his replacement was announced. Whatever words you might use to describe Ron Saunders, ‘glamour’ probably won’t be high on the list. Or even on the list at all. Not that that mattered one jot. The Rioch money was spent on a couple of midfield players, Frank Carrodus and Leighton Phillips who played a strong hand in Villa’s new year burst of form that saw them surge to promotion. Oh, and winning the League Cup was a good day out, as well. Meanwhile, poor Bruce had to settle for the league championship trophy under the management of Dave Mackay, as Derby came top of the pile for the second time in four seasons.

Clearly, selling your best player doesn’t have to spell disaster; if you spend the money well, it can lead to smiles all round for the player, the two clubs and the fans as well.