John Russell reflects on coming to an end.

It may be an age thing, but for me matchday at Villa Park no longer engenders the thrill and excitement that it has done for most of the seven decades since childhood.

These days matchday has become a source of frustration all the way from leaving the house to opening the front door again on my return. I always said that it was ultimately the fifty mile train journey which would lead me to calling it a day. But it is that, coupled with Covid, that has finally led to my choosing to think of becoming a stay at home supporter.

Truth to tell the rot started to set in with the demise of the printed edition of Heroes and Villains. I used to look forward to hearing the raucous cry of the sellers as I crossed Aston Park even before the ground came into view. I used to get a thrill at seeing my articles in print and wondering quite what editorial improvements our esteemed editor had made (if any). Then there was the pre-match chat, now long since a thing of the past. I still get a tingle when my articles appear on the website but it is not quite the same.

For many years I have enjoyed a front row seat in the North Stand. Advertised as the best view in football when it was first opened but annoyingly there is no point in going through the turnstiles too early as there is absolutely no room to wander freely around the North Stand before the kick off, or rushing to get to the seat as the pre-match entertainment is to all intents and purposes non-existent. 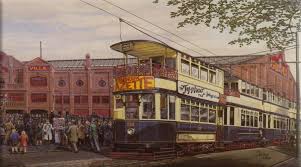 When and if it comes to be demolished I doubt that I will be allocated a temporary seat anywhere near as good as my current one, likewise when the new stand is constructed if I were to renew my season ticket I will probably end up a long way from the action.

When I first went to America to watch baseball they had just built a sensational brand new stadium in Baltimore. Suddenly every one of the thirty Major League clubs wanted a stadium like Baltimore and over the years half have built one. Each stadium better than the one they have demolished but none achieving the uniqueness of Baltimore.

Incidentally, St Louis managed to completely demolish a stadium at the end of one season and open a brand new stadium, partially in the footprint of the old, in time for the opening day of the next. I doubt that that is likely to happen at Villa Park – or whatever name it is given because I have a suspicion that some sort of commercial deal will be struck in order to help finance the deal. And the new Texas Rangers stadium in Arlington lasted barely twenty years before it was deemed ‘unsuitable’ and was replaced.

I used to get a thrill as a child as I approached the ground walking along Brookvale Road all the more so when the floodlights were installed emphasising the location of the field of dreams. Then passing the ground on the number 5 Perry Common bus for twenty plus years on the way to school and then to work in the city centre.

There was the thrill of sitting on the front seat of the bus upstairs as it rounded Six Ways, Aston followed by the passing place on the old tram tracks outside the library on Witton Road. Sadly I never did get to see the trams in Trinity Road, outside the hallowed halls. The installation of the floodlights in the mid-fifties suddenly meant that I could go to every game, home and away and was no longer dependent on reporter Cyril Chapman in the Birmingham Post for my regular ‘fix’.

As I get to type this I wonder whether there are children around who are building up memories to pass on in generations to come. Or is it more, as I suspect, that unlike me children do not get taken to a match aged five but are if they are lucky go for a one-off tenth birthday treat and probably no more than that every year.