Heading off to Norwich in total hope and expectation.

Norwich away, a week andd a bit before Christmas. Thanks, whoever it is that puts the fixtures together. I know clubs in the lower divisions ask for long journeys midweek because it saves them paying for an overnight stay but I don’t think the Villa would miss the cost of a night away. Anyway, we’re stuck with it so make the most of a trip way out east because it’s not going to happen next year. 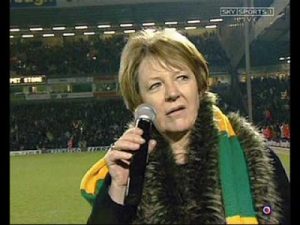 It’s an even-numbered season, therefore Norwich are in the Premier League, which also means we get a six point bonus because Villa beat Norwich. It’s as much a fact of life as saying Liverpool will get a penalty (yes, I am still bitter) or Small Heath’s next song will be about us. Their supporters don’t seem to be too bothered about being in a different league every year and the club in general are fairly amiable.

This is a club whose most notable achievement in their 199 year existence was their owner going on the pitch when she was shitfaced. There’s no great sense of entitlement or belief that they’re the next Leicester; Norwich are that almost unique entity, a Premier League club you can’t really dislike. Well you can but there’s not much point because they won’t be here for much longer.

Norwich start off with the most emvarassing owner any club could wish for (see above), apart from a porn baron, a hairdresser from Hong Kong or a Chinese mystery. They’ve got that Rashica bloke who turned us down last year because he wanted to play in the Champions League and to be fair he’s going the right way about getting it half-right. They’ve also got a manager you might recognise. Talking of which, Steve Bruce is in their all-time team. He’d very likely get a game for the current one, as would their current player of the year, who might be on the pitch if he hasn’t dislocated a fingernail or been trampled by a unicorn or any one of the weird and wonderful injuries we pick up regularly.

Looking at it objectively this one’s a tricky game against a side who still have everything to play for and who haven’t been performing as badly as their results indicate. Looking at it unobjectively we should be aiming to smash them into next year. Villa beat Norwich. It’s the law.