Dave Woodhall comments on the shambolic state of matchday transport.

“Shambolic,” “chaotic,” “beyond pathetic.” For once that’s not the team, it’s the totally inadequate transport plans around Villa Park, which reached a head with the scenes after Saturday’s win over Brighton.

It’s not as though the situation couldn’t have been predicted. On the previous Saturday afternoon I’d had to drive into town to collect my wife, because the trains were so overcrowded passengers weren’t being allowed onto the platform. From Smallbrook Queensway to the pick up lane at New Street took half an hour, and just as long to get to the comparative quiet of Chinatown and onto Digbeth, which is conveniently reduced to single lane traffic as a result of the roadworks that seem to be the city’s biggest growth industry. Add ten of thousands of supporters headed either towards the city centre or blocking Aston Expressway and the other arterial roads on our side of town and you didn’t need a degree in traffic management to see what would happen. 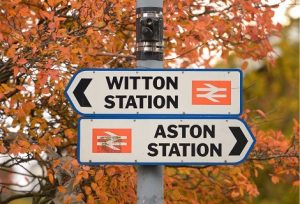 It’s a shambolic state of affairs and worse than that, it makes the club look bad for something that isn’t their fault. It wasn’t the club’s decision to scrap the one-way system that worked well enough. It isn’t their fault that the sight of a bus after the match is becoming increasingly rare. And it certainly isn’t their fault that a train service which in the past was just about adequate is now totally unfit for purpose.

If I lived in many places on the Continent I could use to my match ticket to get free public transport to the ground. It would be quick, use dedicated lanes on the roads and be available at the final whistle without much waiting. I know from experience that the Villa have tried to negotiate some sort of deal with bus companies and they’ve asked for additional train services, to no avail. They were there for the Rugby World Cup and for concerts at Villa Park, but for a Villa game there’s nothing like such co-operation.

The big problem, of course, is that Villa Park now deals with totally different crowds to the ones it was built for. A hundred years ago the majority of our supporters either walked to the ground or got the bus, and there were plenty of them that could be called into service as and when required. The match kicked off in the afternoon, either Saturday or midweek. Now, most people attending Villa Park either drive and have to contend with traffic jams and inadequate parking, or if they do use public transport there’s a myriad of companies who run the services and none of them have the resources, or the manpower, to cater for sudden demand – or, as we’re now seeing on a regular basis, totally predictable demand. There are also more games in the evening or at peak shopping times, both of which add to the transport problem.

West Midlands Rail might say they put on extra trains, but there clearly aren’t enough of them and their matchday planning doesn’t work. You can’t expect paying customers to queue for over an hour just to get on a train; it’s bad for the Villa’s reputation and it’s going to cost us supporters. There are plans to expand Villa Park, which begs the question of how much worse last Saturday would have been with another ten thousand supporters leaving the ground. That’s without adding extra problems for the local residents who already have to put up with more than enough inconvenience on matchday.

Without wishing to get overly dramatic, the issue is getting beyond one of mere customer service. It’s becoming a matter of health and public safety, because if what we saw at the weekend keeps getting repeated, tempers will start to flare and serious problems might occur. Public transport in the West Midlands has been second-rate for long enough, and the worsening situation on matchday should bring the matter to the attention of those who make such a big play of running the region, because it doesn’t just affect Villa supporters. Anyone travelling through the city centre, on the M6 or on every road for miles around on matchday, now runs the risk of being inconvenienced.

In the long term we have to have a proper look at our attitudes to public transport throughout the country. For now, the Villa bring visitors to the region. They in turn bring income, prestige and recognition. And when anyone travels here to watch the match, whether from outside the region or from abroad, they end up having to suffer this shambles. This problem needs a proper, multi-agency approach from those who have the power to implement change, because that’s the only way we might finally see some improvement. Does anybody know what Invisible Andy Street’s doing these days?