The takeover of Newcastle United will change football forever. Again. The story seemed to both have been around forever, but also came out of nowhere when it was announced on Wednesday that it was close to being completed – you get the feeling that the media, Newcastle fans and fans of other clubs aren’t really sure how to handle the news, though. How do you treat news like this? It’s certainly big, but what does it mean?

I have a couple of friends that are Newcastle fans, and they seem to not really know how to react. Obviously the whole thing, including the reason for the delay, is morally reprehensible, but that is nothing new or unique when it comes to the Premier League or takeovers.

But for Newcastle the club, it’s really difficult to know what it means. They’re very much like Villa from the outside – a decent, traditional club, with a passionate fan base but whose expectations have far exceeded reality in recent years. Both sets of fans would point to the way the club has been run as a reason for the slump, and of course they’re right. These days clubs can only be successful if they have the right (or more often than not, wealthiest) owners – so we have both struggled, both been relegated and promoted, and neither have won anything of note for far too long. 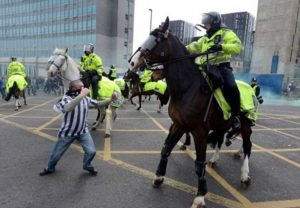 It feels like that episode of The Simpsons when Homer went from working for Mr Burns to working for Hank Scorpio – from petty, unrelenting meanness to wonderful, exciting pure evil.

Of course, part of the reason that nobody really knows how to react is that we don’t know exactly how they’ll run Newcastle. But the money Manchester City used to take our homegrown hero is pennies to them, and I can’t imagine that they’ve gone through all this effort just to ensure Steve Bruce secures fifteenth in the league every year…

I genuinely do feel sorry for Newcastle fans, though. Their club is about to change forever, and they have less input than a bunch of suits that have been fretting over TV rights halfway across the world for the last eighteen months. I bet those guys are all mightily relieved that they’ve secured those rights and got the takeover through, though. Probably due a bonus.

As an outsider, how am I supposed to feel about Newcastle going forward? If I hate the owners, do I hate the club? I don’t really want to hate Newcastle in the same way I hate Manchester City and Chelsea, but, I mean, the owners are a lot richer and more (at least openly) evil. 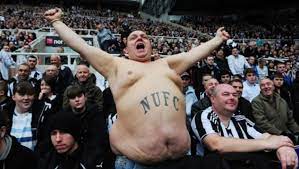 A few quite predictable things are happening already – (some) non-Newcastle fans who have never spoken up against the Saudi regime before are using it as a stick to beat Newcastle with, and (some) Newcastle fans are whatabout-ing right back at them. Both sides of this have perfectly valid arguments, of course, although it does leave a sour taste to see football fans sticking up for a regime with such a horrific human rights record.

I’ve seen a few snooty articles written, bemoaning the tribal nature of modern football that has led to this sort of argument breaking out. Football has always been tribal – in fact, I’m pretty sure that is the entire point of football. Us against you. If you’re with us, we’ll always have your back, but if you’re against us we’re coming for you.

Which is why I feel so sorry for Newcastle fans – they are in a quite awkward position now. I mean, of course, the answer is to completely separate the owners (and their actions) and the club/team. But that gets increasingly difficult to do these days – owners are generally much more prominent, and integral to the success of a club. Newcastle fans will always know that any success that comes their way from now will be as a direct result of their new owners. They are the peasants in the fields that celebrate the King’s victorious war campaign. I guess we all are. We want to be part of success, even if we wish the King wasn’t such a Cnut.

Would you boycott? You were here first, why should you leave a huge part of your life? Would you protest? I hear this particular regime has always deeply cared about people’s rights to freedom of expression… Would you get behind them and write open letters addressed to ‘His Excellency’? Urrghfffhuystsschhh. (Sorry, I think I was just sick in my mouth)

I think, ultimately, Newcastle fans are on a hiding to nothing here. I don’t see how they win. I’ve spoken before about how I pity Manchester City fans – trapped in this state of paralysis where failure isn’t an option and therefore any victory just doesn’t feel as special. Going to Wembley for another League Cup final is an inconvenience, and Champions League group matches just aren’t worth the bother. What fan actually craves feeling like this?

Of course, this is not the line that we’re fed. Apparently we all want to see the world’s best players playing for our clubs, and if we’re not spending £150 million every summer, then why do we bother turning up? This narrative has been burned into our psyche to such a degree that I can’t see it ever being reversed. 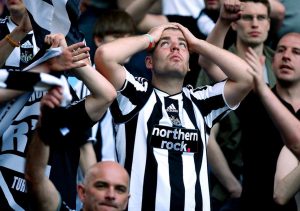 Is it true though? Last season we scored some great goals, and some very important goals. The one that made me cheer the loudest? Louie Barry’s equaliser against Liverpool in the FA Cup. Not because I thought we were going to win that match, but for everything else. The look on the players’ faces when that went in meant more than the 7-2 earlier in the season. Winning means a lot, but it is far too binary to suggest that it means everything.

When I asked my Newcastle-supporting friend what they hoped for from the new owners, he said this: “Lots of investment in the academy. Bring through decent youth is a must. Bring in a good manager. Aim to invest wisely in a few decent players in Jan. No superstars for £100 million+. Immediately rectify their human rights record. This is a no win scenario.” But at the same time, he is excited – and for all of my pontification, I think I would be too, even with all of my reservations.

Does that mean I wish Newcastle well? Absolutely not. I wish them nothing but underachievement and disappointment, as I do the other ninety clubs. It was nice to see his ‘ideal’ scenario was pretty much exactly what our owners are working on, though – but how successful that will prove to be with another Chelsea/Manchester City in the league will remain to be seen, of course.

So, while we get used to the new media narrative of Newcastle’s ‘deserved’ and ‘overdue’ period of success, I guess we can be quietly smug that we have a couple of owners that seem to be doing the right thing when it comes to building the club up, and as far as I am aware have never violated humanitarian international law. Whatever happens in the North East, I am delighted with our owners, and wouldn’t swap them for anyone.

But then, I would say that, wouldn’t I?