Richard Nevin gazes down on a familiar site.

We all do it. I’m sure other clubs’ supporters do it but not many have the vantage point that we have. It’s probably dangerous if you’re driving, not so much when you’re not and doesn’t make a lot of sense, particularly the older you get. I’ve done it from an aeroplane and it was brilliant.

North or south on the M6, into or out of town on the Expressway, or at however many thousand feet above we all crane our necks for a look at Villa Park. We’ve been inside and outside countless times, seen pictures, own pictures, or paintings but a drive by glimpse of our home holds a certain sort of thrill that never seems to wane. Nestled amongst the trees at the foot of Aston Park the place never fails to look magnificent but then, we would say that.

Other fans will do it I’m sure but I would imagine it’s with varying degrees of disdain. In fact there was a fanzine at one time called “There’s Villa’s ground”. I think it was from Barnet.

I did it not long ago but as I swept from M6 south onto the Expressway I also glanced left as well as right and although I have seen the gas holders of Windsor Street as many times as the ground, these now defunct, monolithic relics of our industrial heritage,looked resplendent in our holy colours and along with a the stadium made a suitable claret and blue gateway to ourcCity. Those colours looked stunning in the early autumn sunshine, and while I know other clubs sport versions of what we wore first, I arrogantly think they belong to us and no one else. Yet I never dress myself in them and I got to thinking why. My return to the Holte as a season ticket holder has drawn my attention to the number of fans that do and how I’m firmly in the minority. 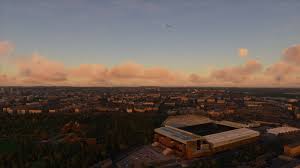 I have a scarf tied to the bedstead, one above my desk at work, Villa pictures around the house, drink out of Villa mugs and if someone gave me free reign to paint anything it would be claret and clue.

Yet I don’t own a shirt, or training top, or hat, in fact I just have a pair of shorts from a few years ago and they never get seen in public. The nearest I get is sporting one of those metal button badges, sold around the pubs and displayed by the trader on what appears to be the cork board from his kitchen, after the bin days leaflet and Chinese takeaway menu have been removed.

So why not? There are a number of reasons. Without wanting to offend anyone, athletes look good in athletes clothing, people who aren’t athletes don’t. I recall a rare visit to JB Sports where every customer appeared not have engaged in any kind of sporting activity in their lives, and I include myself in that sweeping generalisation. I had replica shirts when I was younger but the last one I had was the yellow away number, notable for that FA Cup defeat at Anfield in 1992. I was 21. I had a 1970’s home shirt when classic kits first became popular but other than that, nothing.

It didn’t help that within minutes of wearing a football shirt I seemed to have some sort of reaction to the material and would ended up stinking like a tramp’s sock. When you travel away, pre-match drinking is a big part of the day and I enjoy a pint in a pub “rammed with Villa” and optimism, full of lusty singing, plastic glasses, friendly faces and big queues. But sometimes you can’t find them or get in or just don’t fancy a Carling shower. The only option is trying your luck on enemy territory, keeping a low profile, keeping quiet and just enjoying your drink. This rules out wearing your “I think Villa are great” top hat or indeed any other colours so this was a major influence. Even if you are outed, most fans will leave you be if you keep your trap shut. You get your pint and also reason to tell tall tales about bravery and gain faux hooligan kudos for boozing where you shouldn’t.

I grew up in the age of the football casual but my friends will tell you that fashion isn’t something you’d associate me with but never the less, then, as now I don’t declare my allegiance via the way I dress when going to the match. So the anticipation of a new kit, arguments about the cost and the quality just pass me by, not having kid’s helps greatly in this respect. I love Adidas three stripe trainers but would never dream of purchasing a claret and blue pair purely out of habit, I rarely attend away games so that is not a consideration but I stick doggedly to this, frankly pointless rule. I don’t feel that I’m missing out, perhaps I am but it’s subjective of course and at my age I don’t believe I’m ever really going to change now.

When those gas holders come down, scheduled to happen in the near future, we will lose something special in the city, which is a great shame but claret and blue will of course prevail, just not in my wardrobe.

Oh, and I do have another childish rule about colour. No royal blue. Anywhere. Ever.