Looking ahead to the League Cup tie at Barrow.

It’s difficult to know what to say when you’re looking ahead to the second round of the League Cup and you’re playing one of the smallest teams in the competition. It’s not fair to be arrogant and it’s easy to be patronising. You can’t come out with the usual cliches about potential banana skins and the magic of the cup because apart from both sets of supportes nobody is all that bothered.

Back in the good old days everyone in the country woud be talking about Barrow, just arrived in the league and with a ground we could have sold out on our own, at home to the mighty Aston Villa. Over the next couple of weeks Premier League clubs will lose to opponents whose wages barely cover the cost of their floodlights without much of an eyelid being batted. No, it’s not fair but that’s football. Like it or not, the League Cup is a pain in the arse for any of the clubs with any chance of winning it. The novelty of a new ground isn’t even going to count for more than the six hundred-odd of us who will me be making the expedition up the M6 and turn left to Barrow. If you’re going, good luck and see you when/if you ever get back. Don’t go in the sea – it’s radiocative, and hypothermic even in August. The town was voted the unhappiest in England three years ago and they build submarines. There may or may not be a connection. 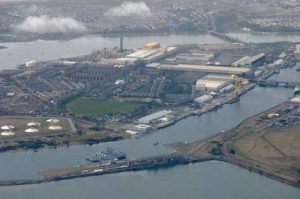 They’ve got Dimitri Sea, who was with our Academy for a few years. His first club was in Paris and he’s probably still wondering even now what happened. If you recognise any more of their players you watch more TV than is good for you although they’ve got three in their squad named Josh. Their manager had a lengthy career in the lower divisions, playing for such undistinguished clubs as Forest Green Rovers, Hartlepool, Rushden & Diamonds and Birmingham City amongst others. Peter Withe played for them many, many years ago and they were the first club to get back into the Football Leauge after being voted out before automatic relegation came in. And that’s all there is to know about Barrow.

We’ll probably put out a mixture of fringe first-teamers, maybe one or two who still need a bit of a run-out and some of the under-23s who haven’t been loaned yet. Their supporters will sing about Premier League you’re having a laugh and all that. Their younger element may well go back to school boasting about how the Villa didn’t want to know. I really hope ours don’t some out with any embarassing stuff about shitholes and never winning European Cups. And at the end of the game we’ll say how well they played, while they count the takings and the TV money. Everyone’s a winner.