Richard Keeling gets caught up in recent events.

“So why aren’t you watching the football?” This question from my wife took me by surprise as she hates the game and would be quite happy to see it abolished. I nearly replied: “Because if ladies want to play football I don’t mind in the least but I don’t need to know about it”. I could also have told her that it enrages me how I keep seeing football headlines which look like they might be interesting only to find that they are about the women’s game. In the end I opted for a slightly less controversial reply, telling her that I enjoy a break after nine months of following the trials and tribulations of the Aston Villa and England’s men’s teams.

“You would be watching if it was the men,” she retorted. “You’re sexist.” This was something of a bombshell as I have never considered myself to be particularly sexist. Perhaps it was time for a reappraisal, but I wasn’t really in the mood for one so soon after breakfast. However, a day or two later I had a bit of spare time and decided to make a concession by switching on and watching most of the second half of the semi final against Sweden.

After many years of watching football on TV I now always keep the sound muted because I can see what is going on and don’t need the accompaniment of an over excited and frequently puerile commentary. OK so I am a grumpy old sod and getting worse, but my hearing is fragile enough without it being assaulted unnecessarily. It turned out to be a good job that the sound was off because there was plenty for commentators and fans to get overexcited about.

Initially I was intrigued by the number of blonde ponytails bobbing about and it soon became apparent that there were very few black faces, in this match at least. Men’s football has become more and more of a mixed-race game over the last thirty years or so and now feels thoroughly multiracial. So this game really felt in some ways like a throwback – at least until the familiar face of Wrighty appeared among the pundits.

I also immediately wondered of course how many Villa players were in the team. I doubt that I would have found out from the TV even if I had had the sound on, so I looked it up and found that we at least had a goalkeeper in the squad along with a player on loan from Manchester City. In fact, Manchester City had no fewer than nine players in the squad, while Chelsea and Arsenal each had four and Man Ure had three. That quick internet search told me all I needed to know. The usual suspects turn out to be buying all the women’s trophies as well as the men’s ones. Well, what a surprise! 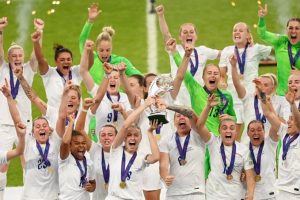 Returning to the second half of the semi-final, the relative lack of histrionics was a pleasant change from the usual fare. One of the four England goals was a backheel which went between the Sweden goalie’s legs, so it was frustrating to me that Danny, Ollie and co were Down Under, as that is something we could do with seeing from them more often. Perhaps they will be able to watch on catchup and learn something from the ladies……

I decided to keep my wife updated with progress after the second semifinal and I let her know that England would be meeting Germany in the final at Wembley. “Oh,” she replied, looking totally uninterested, “so it’s a repeat of 1966 then?” I thought that was pretty impressive, as it was the very first football related comment that I have ever heard her utter, so foolishly I was encouraged to try to prolong the conversation by joking that Germany might win on penalties. That was a definite mistake.

During the competition there was a lot of fuss about the England women’s football team of half a century ago. You won’t be surprised to learn that I was as uninterested in women’s football in 1972 as I am now, despite the first ever England women’s international being played in November of that year. Nevertheless, it seems rather remiss of the FA not to have awarded the players official caps rather than replica ones. Now is a good time for the ladies to make a fuss, as sexual (and racial) equality is a hot topic. Just don’t call the 1972 players Lionesses though. In those days they were plain England women footballers and they didn’t need a ghastly, patronising nickname.

Interest in women’s football is apparently not a new phenomenon. According to the Channel 4 News website, women’s football was incredibly popular up until 1921. This was especially the case during the first world war, with games drawing large crowds and raising hundreds of pounds for charity. On Boxing Day 1920, for example, over 53,000 packed into Goodison Park to see the popular team Dick Kerr Ladies of Preston beat St Helens Ladies 4-0. The Liverpool Echo reported that: “the ladies… gave us all great pleasure. We appreciated their skill, their stamina, their determination and their manner of taking hard knocks ‘without turning a hair’.”

Claiming the game was too physically demanding for the fairer sex (or, as some suspected, fearing that the post-war ladies’ game threatened to eclipse the men), on 5th December 1921 the Football Association promptly banned women from playing at any of its members’ grounds, on grounds that it was “unsuitable for females.”

This put an end to many teams, and consigned girls to decades of officially unsanctioned, poorly attended park games or jokey publicity stunt matches. The ladies’ game never entirely disappeared though, and in 1969 the euphoria after the 1966 World Cup led to the formation of the Women’s Football Association After two years of pressure, the FA ban on female teams was finally lifted in 1971.

In football as in so many walks of life women have been appallingly treated. I only found out recently that Cambridge University did not award degrees to women until after the second world war, even if their academic performance equalled or surpassed that of men. There are many examples of similar discrimination, but fashions are changing, not just in football. I wonder whether the women’s game will before long threaten to eclipse the men’s a second time.

And so to the final. My daily paper had eight full pages about the match on the eve of the game. It is of course the start of the silly season when the media have to scratch around for stories to fill their pages. One headline that wasn’t made up for the silly season, though, was: “Brands line up to offer Lionesses sponsorship.” That headline made it crystal clear that it’s now all about money.

When the teams appeared for the final some of the ladies looked like tough cookies. Sexist? Moi? Surely not. Anyhow we got the right result in the end, though I thought we were second best for a good part of the game. So all credit to our girls for sticking at it and coming out on top in a really tough encounter.

It is great that girls are now encouraged to take up football and that women’s football is no longer so cruelly discriminated against. However, ladies, I would recommend taking headlines in the billionaire press like “It’s time to end 100 years of hurt” with a large pinch of salt because the media aren’t remotely interested in hurt feelings. All that is important is corporate greed. Welcome to our world.