Stacy Murphy on the only story in town.

The story of Dean Smith as Aston Villa manager never really seemed to be the story of just the man himself, as it was interwoven with another local; the man Smith made captain, the man whose profile he helped raise to ridiculous heights and ultimately the man who, from the outside looking in, decided Smith and Villa weren’t good enough for him anymore. The man who cost Smith his dream job of Villa manager. That man is Jack Grealish.

That picture of the two men with the play-off trophy which adorned the North Stand represented the vision that many of us bought into; two Villa fans leading the club against the best sides in the country, and hopefully Europe. The difference when the playing half of the duo was missing was stark and showed how much the coach relied on him to be the fulcrum of the team and the 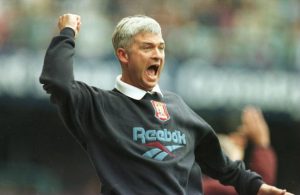 summer-long saga of Grealish’s ten months into a five-year contract felt like a betrayal to fans. Of course Dean Smith was and remains one of those fans but he is the one fan affected far more than any of the others. Grealish, his agent and Manchester City sold Smith down the river by dragging out what we now know was inevitable.

The club’s line on not replacing our former captain directly but bringing a range of talented players to cover the loss is admirable but it created more issues, as all of those players have to settle into their new surroundings both personally and professionally. It also didn’t help that at least one of those players was not fully match fit after missing pre-season.

Having to deal with the permanent absence of his main creative force and needing to incorporate the range of replacements gave Smith more issue than those replacements solved. The lack of opportunity to experiment in pre-season left him not knowing what his preferred formation was or which players to use. Injury to Ollie Watkins and several players performing well below last season’s levels as well as the issues with the newcomers left Smith desperately searching for a winning formula. The 3-5-2/5-3-2 seemed to be working for a few games but really the results masked the game of catch-up Dean was playing, especially when you throw in the eve of season changes to previous key members of coaching staff.

Dean Smith’s departure will no doubt please a few very vocal detractors who became very predictable and dull in their criticism but Dean’s departure is sad for the club and the majority of us as fans. If twenty-five years ago Ian Taylor was the one of us who climbed out of the Holte End to fulfil all our footballing fantasies on the pitch then Dean Smith is the one of us who walked around the track to sit in the dugout. I wish him the best of futures.

Now again, as was perennially the case under two of the last three boardroom regimes, we need a manager, or head coach as it will probably be. None of the names mentioned so far have particularly filled me with enthusiasm which is why I find the timing of Dean Smith’s removal slightly puzzling. I understand the board’s view of the team’s record over the last calendar year and five consecutive defeats but there is no immediately obvious replacement in the way there was when Brian Little took over from Ron Atkinson at a similar time of year.

That Steven Gerrard appears to be the early front runner fills me with a sense of empty dread. His lack of real experience in a competitive league and an expected obsession with Liverpool count against him to my mind but I appreciate that his profile will always give the media licence to link him to Premier league vacancies. I expect Johan Lange and Christian Purslow will be looking abroad for our next head coach and hope he will be more in the mould of Jurgen Klopp than Remi Garde.

Whoever is appointed it is extremely unlikely they will ‘get’ the club in the same way Dean did and, as a fan, no doubt still does.