The fact that little Highgate United from Shirley had reached the fourth round of the FA Amateur Cup was in in itself almost cause for celebration. All the more so when they were drawn to play at home to illustrious visitors from North London, a traditional hotbed of amateur soccer, Enfield. Clubs from the West Midlands which virtually gave birth to professional football had never before reached such dizzy heights in the world of the ‘play for fun’ brigade. 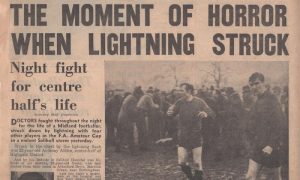 Most Villa supporters will not have given the game a second thought.as we were involved in the almost ritual battle against relegation. We had just suffered controversial back to back 0-1 defeats at championship hopefuls Liverpool in league and cup and nobody gave them a halfpence worth of a chance away at high flying Leeds. The 2-0 win was one of the shocks of the sixties.

Meanwhile, disaster befell Highgate United at Shirley when after 38 minutes play the ground was struck by a freak bolt of lightning. Several players were struck but worst effected was Tony Allden, who despite the heroic efforts of trainer Albert Bates and later the staff at Solihull hospital died next day from his injuries. He was not struck directly but it was said that he had been standing at the highest point on the pitch

Obviously the referee had to abandon the game and this was followed by the vexed problem of a replay, if any had the stomach for it that is.Immediately into the breach stepped Norman Smith, then chairman of Aston Villa. Since day one Villa have always been charity minded as intimated by their support for the Childrens Hospital and more recently the Acorns emblazoned on their shirts. Villa would be willing to stage the replay at no charge whatsoever to all the parties involved.

So it was that on Tuesday 7th March 1967 31,570 turned up at Villa Part to pay their respects to Tony Allden et al and cheer for a team we knew next to nothing about. If that does not sound all that many, bear in mind that our average attendance for the season was only 21,576 and the only time it was exceeded that campaign was by the 39,937 who turned up to watch eventual champions Manchester United (Believe it or not we won 2-1). The receipts were £6,151, astonishing for an amateur game for which Villa as the staging club were entitled to 10% but instantly donated their £615 to the fund for Allman.

It would be nice to be able report that the saga had something of a happy ending but sadly for Highgate the occasion proved to be overwhelming and they were overwhelmed, 0-6. Rarely if ever has a defeated team received such a standing ovation at the end.