Allow me first to declare a family interest. My former wife’s grandfather became deputy chairman of the West Midlands Gas Board, for which he was awarded the OBE. His medal and citation used to hang in a frame by the front door of his house in Bournville on view to any itinerant caller, which probably accounts for how they came stolen. If you know where they are now the family would like them back.

Unfortunately he died in 1973 so he would not have been able to help in the great mystery surrounding these Nechells gasholders – how and why were they painted claret and blue? The second mystery is, where are they?

Ask any taxi driver with the local ‘knowledge’ and it is a pound to a pinch of snuff (only a true Brummie could have written that sentence) that like as not they would not be able to take you to the factory gate. For five years I passed within sight of the gasholders on the number 8 bus en route to Bordesley Green but could not place where they actually were and have had to look it up on the map. Windsor Street, Nechells was actually one of most unprepossessing streets in the city and if it was not for the Nechells Parkway would remain what it had always been, an almost inaccessible cul de sac. 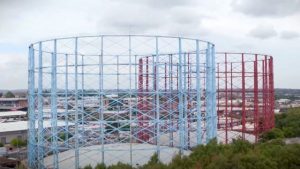 Back in my school days they they stood out black and perhaps slowly rusting away and obviously in need of regular expensive maintenance. I always thought that the gasholders were the wrong side of the invisible boundary that I had to cross every day with fingers crossed that separated Villa territory from Blues territory in the city. And this may account for the claret and blue when possibly a proud factory manager and Villa fan decided the structures needed a bit of brightening up. And, besides, they certainly would not have looked so spectacular in royal blue – even if they could get hold of that much paint. I would like to think that grandfather would have approved of the idea and signed it off but it’s unlikely.

On 26th October 1990 fourteen all-party Midland MPS tabled a commons motion praising the decision to paint seven gasholders in the area. Robin Corbett (Erdington) said that the intention linked our area to our great industrial heritage. The seven were not identified but given this comment from a local, surely they included our three. On 11th October 1997 Carl Chinn had an article in the Mail about Nechells Gasworks on the centenary of an explosion there. He makes no mention of their being painted claret and blue, which surely he would have done so if it were the case. I reckon that most likely 2000 or later is closer to the date that they were actually painted, because I would surely have noticed if they had been done earlier. The one certainty is that they were not done at the time of our European Cup win.

The sad thing is that unlike the gasholder at the Kennington Oval cricket ground, nobody thought to try to get a preservation order on the Nechells three. Perhaps probably being unloved, except by me, and so relatively far from B6 6HE would have mitigated against them. It is to be hoped that the demolition of the gasholders does not take on the aura of the scaffolding around the steeple of Aston Church which twice coincided with the relegation years of 1936 and 1959. And perhaps the residents of the small enclave around the site would have not been particularly enthusiastic either, since they were hardly likely to become a tourist attraction, like a rusting bull. Is it possible that parts from the now dismantled gasholders have found a second purpose in being incorporated into the bull? Perhaps not. But possibly the remains could yet become used to become part of some modern sculpture in a city park or rather than thrown into a furnace passed on to residents to make something of a garden feature.

In some ways the rise and fall of the gas holders used to reflect the state of wellbeing in the city. Full at the start of the day and falling like a barometer with the passage of time, near-empty as dusk gave way to darkness. Now all that gas remains unseen beneath our feet and nobody can tell you how it gets there.

Go to any town or city in the nation and it is often possible to determine where their old gasholders used to be. I do not know the fate of the Nechells three but like as not as elsewhere the derelict area will become part of a low level industrial estate Less likely a skyscraper because by definition gas works were never close to a city centre where such buildings prevail. More likely sold off for ‘affordable housing,’ whatever that means. Have you seen the price of houses lately?
On the other hand I believe there is now a football pitch in the shadow of the once Nechells three so perhaps there will be room for a few more pitches

Perhaps appropriately, gas production in the city ended in 1974 with advent of North Sea gas, precisely a century on from the date which is now emblazoned on the heart of every Aston Villa supporter. But as every vintage Villa supporter can tell you “Electrify your Villa – and Score”.